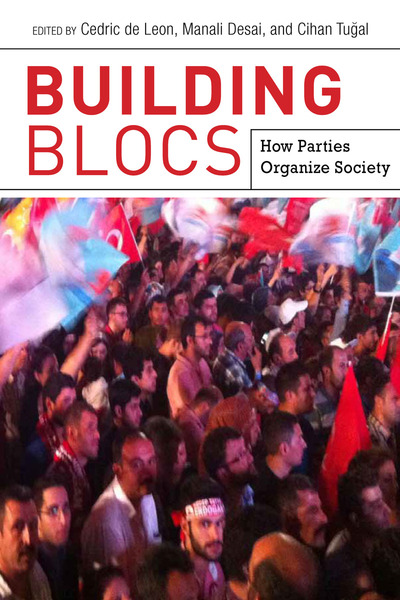 Do political parties merely represent divisions in society? Until now, scholars and other observers have generally agreed that they do. But Building Blocs argues the reverse: that some political parties in fact shape divisions as they struggle to remake the social order. Drawing on the contributors' expertise in Indonesia, India, the United States, Canada, Egypt, and Turkey, this volume demonstrates further that the success and failure of parties to politicize social differences has dramatic consequences for democratic change, economic development, and other large-scale transformations.

This politicization of divisions, or "political articulation," is neither the product of a single charismatic leader nor the machinations of state power, but is instead a constant call and response between parties and would-be constituents. When articulation becomes inconsistent, as it has in Indonesia, partisan calls grow faint and the resulting vacuum creates the possibility for other forms of political expression. However, when political parties exercise their power of interpellation efficiently, they are able to silence certain interests such as those of secular constituents in Turkey. Building Blocs exposes political parties as the most influential agencies that structure social cleavages and invites further critical investigation of the related consequences.

Cihan Tuğal is Associate Professor of Sociology at University of California, Berkeley, and author of Passive Revolution: Absorbing the Islamic Challenge to Capitalism (SUP, 2009).

Manali Desai is Lecturer in Sociology at the University of Cambridge and author of State Formation and Radical Democracy in India, 1860–1990.

Cedric de Leon is Associate Professor of Sociology at Providence College and author of Party and Society: Reconstructing a Sociology of Democratic Party Politics (2014) and Origins of the Right to Work: Anti-Labor Democracy in Nineteenth Century Chicago (forthcoming).

"This is the rare edited volume that presents itself as a manifesto for a new school of thought. The combination of an agenda-setting statement with empirical case studies allows the book to make an effective and forceful case for the political articulation approach."

"Building Blocs is a powerful counter to sociological arguments that present politics as a reflection of social ties and identities. Parties, in this analysis, actively articulate identities, cleavages, and interests that sustain and are sustained by the governments they make. Ranging across continents and centuries, addressing cases of both successful and failed articulation, the chapters underscore the importance of parties in structuring the relationships between states and civil society. With this tightly-integrated volume, de Leon, Desai and Tuğal establish a compelling agenda for political sociology."

"Building Blocs breaks new ground in our understanding of political parties. The original studies assembled in this volume demonstrate that parties are not only an important part of the political landscape but are also—more provocatively—vital sources for its transformation. This is a must read for students of politics."

"Building Blocs offers a thought-provoking and creative sociological rethinking of the role of political parties not just in politics but in society. The volume will be a useful addition for scholars of parties, identity, and mobilization and is appropriate for upper-level undergraduate or graduate courses on these issues. Moreover, the framework presented will help to spur and structure a continuing neo-Gramscian agenda in the social sciences, of exploring the nature of hegemony and the interplay of civil and political society in a comparative perspective."

Jadaliyya
Trump got it half-right on Brexit