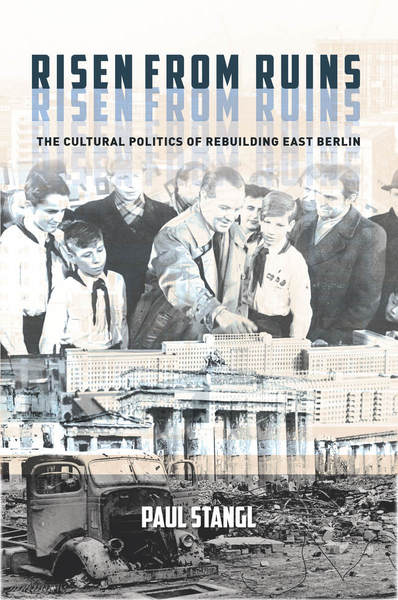 In the aftermath of the Second World War, Berliners grappled with how to rebuild their devastated city. In East Berlin, where the historic core of the city lay, decisions made by the socialist leadership about what should be restored, reconstructed, or entirely reimagined would have a tremendous and lasting impact on the urban landscape. Risen from Ruins examines the cultural politics of the rebuilding of East Berlin from the end of World War II until the construction of the Berlin Wall, combining political analysis with spatial and architectural history to examine how the political agenda of East German elites and the ruling Socialist Unity Party (SED) played out in the built environment.

Following the destruction of World War II, the center of Berlin could have been completely restored and preserved, or razed in favor of a sanitized, modern city. The reality fell somewhere in between, as decision makers balanced historic preservation against the opportunity to model the Socialist future and reject the example of the Nazi dictatorship through architecture and urban design. Paul Stangl's analysis expands our understanding of urban planning, historic preservation, modernism, and Socialist Realism in East Berlin, shedding light on how the contemporary shape of the city was influenced by ideology and politics.

Paul Stangl is Associate Professor at Huxley College of the Environment at Western Washington University.

"Visitors to Berlin today may have no sense of the postwar history that significantly reshaped what East Berlin looks like now. Stangl's book is an indispensable guide to this complex past."

"A compelling account of how Marxist-Leninist ideology, political contingencies, architectural discourses and urban planning paradigms informed and directed the reconstruction of East Berlin, the capital of the German Democratic Republic. This is a fascinating book and a timely contribution to the literature on the built environment of Berlin."

"An impressively researched book, Risen from Ruins provides a comprehensive analysis of the politics of urban space in East Berlin. Its greatest achievement lies in capturing the dynamism of socialist realist architecture and the complexity of debates about historic preservation. A book of great breadth and depth, it deserves a wide readership among scholars of memory, urban space, and Soviet Communism."

"Stangl does an excellent job in highlighting the conflicts and irreconcilabilities that dominated the planning discussions of the immediate post-war era, employing his 'pathways of memory' device with great effect. What emerges is an impeccably well-researched and engaging work, amply illustrated and competently composed. The author more than meets his stated ambition to reveal the deep but complicated relationship between politics and planning during a period of tremendous political tension and instability. As such, students of communist politics and ideology will find every bit as much value in this work as those of architecture and urban planning."

"Paul Stangl's Risen from Ruins offers an in-depth study of East Berlin's reconstruction in the first decade after World War II....Stangl captures the combination of openness, excitement and frustration that marked the architectural rebuilding process in these years, revealing the complex processes that belie the simplicity of Socialist Realist theory....Stangl rewards careful readers by offering nuggets of new information or telling anecdotes on nearly every page."

"Stangl adds to our understanding of the relatively well-researched socialist remodelling of East Berlin with a relevant book that impresses with its breadth and accessibility. For historians of East Germany, the strongest parts of the book are the sections that bring public opinion and the voices of local residents into the discussion of urban planning policies, such as the excellent chapter on Stalinallee."––Marcel Thomas, Urban History

"The strengths of the book are undoubtedly the in-depth research behind the analysis as well as the ability of the author to break down theoretical debates....[Highly] recommended to all those interested in early GDR planning in Berlin."