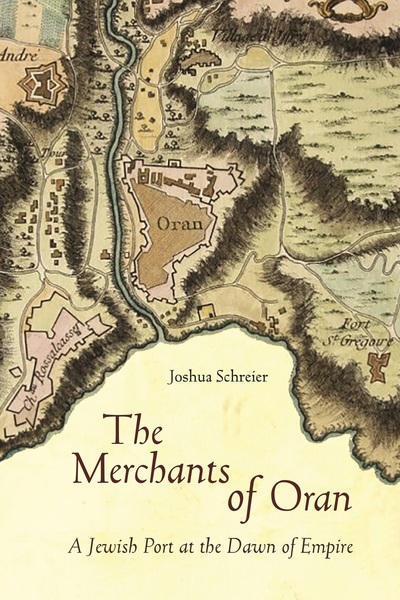 The Merchants of Oran
A Jewish Port at the Dawn of Empire
Joshua Schreier
SERIES: Stanford Studies in Jewish History and Culture

Finalist in the 2017 National Jewish Book Awards in the category of Sephardic Culture, sponsored by the Jewish Book Council.

The Merchants of Oran weaves together the history of a Mediterranean port city with the lives of Oran's Jewish mercantile elite during the transition to French colonial rule. Through the life of Jacob Lasry and other influential Jewish merchants, Joshua Schreier tells the story of how this diverse and fiercely divided group both responded to, and in turn influenced, French colonialism in Algeria.

Jacob Lasry and his cohort established themselves in Oran in the decades after the Regency of Algiers dislodged the Spanish in 1792, during a period of relative tolerance and economic prosperity. In newly Muslim Oran, Jewish merchants found opportunities to ply their trades, dealing in both imports and exports. On the eve of France's long and brutal invasion of Algeria, Oran owed much of its commercial vitality to the success of these Jewish merchants.

Under French occupation, the merchants of Oran maintained their commercial, political, and social clout. Yet by the 1840s, French policies began collapsing Oran's diverse Jewish inhabitants into a single social category, legally separating Jews from their Muslim neighbors and creating a racial hierarchy. Schreier argues that France's exclusionary policy of "emancipation," far more than older antipathies, planted the seeds of twentieth-century ruptures between Muslims and Jews.

Joshua Schreier is Professor of History at Vassar College. He is the author of Arabs of the Jewish Faith (2010).

"In this eloquent evocation of the era of French colonization of Algeria told through the life of a Jewish merchant and community leader, Jacob Lasry, Joshua Schreier challenges the monolithic French colonial representation of 'indigenous' Jews as oppressed, backwards, and isolated—awaiting to be emancipated—by revealing how Algeria's cosmopolitan Jews were active agents in shaping and transforming Jewish society under French rule in Algeria."

"Against a rising tide of large-scale histories of empire and colonization, Joshua Schreier's book calls attention to the compelling perspectives offered by individuals. Brought to life through Schreier's tenacious research, the Jewish merchant Jacob Lasry and his contemporaries give the reader a refreshing vantage point from which to rethink French colonialism in the western Mediterranean."

—Benjamin Claude Brower, The University of Texas at Austin

"Joshua Schreier challenges the conventional narrative of Jewish emancipation in Algeria at the hands of the French that began with the conquest in 1830, continued through the Crémieux Decree, and ended with the departure of Algeria's Jews for l'Hexagone during the Algerian War....Schreier not only exposes the contradictions inherent in the new colonial order but also shows how the habits and practices of Oran's merchant elite formed prior to the French conquest allowed its members, like Lasry, to adapt and to thrive under the new regime."

"This is an important and thought-provoking contribution to the history of Oran and its Jewish mercantile elite; a study that will interest scholars of empire, France, Jewish history, as well as those curious about the economies of port cities amid chaotic shifts in imperial governance."

"Schreier raises questions of great importance which deserve further exploration....[T]he history of French Algeria becomes much richer and much clearer when space is allowed for more than one perspective."