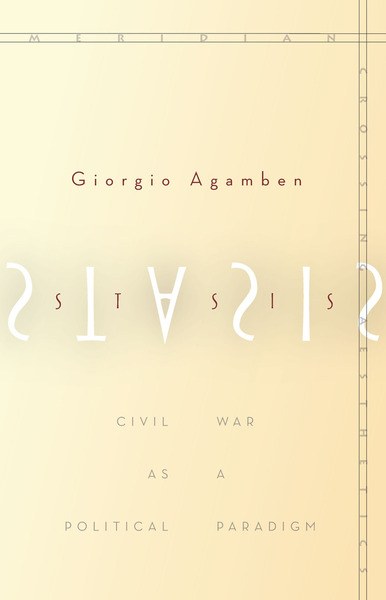 We can no longer speak of a state of war in any traditional sense, yet there is currently no viable theory to account for the manifold internal conflicts, or civil wars, that increasingly afflict the world's populations. Meant as a first step toward such a theory, Giorgio Agamben's latest book looks at how civil war was conceived of at two crucial moments in the history of Western thought: in ancient Athens (from which the political concept of stasis emerges) and later, in the work of Thomas Hobbes. It identifies civil war as the fundamental threshold of politicization in the West, an apparatus that over the course of history has alternately allowed for the de-politicization of citizenship and the mobilization of the unpolitical. The arguments herein, first conceived of in the immediate aftermath of 9/11, have become ever more relevant now that we have entered the age of planetary civil war.

Giorgio Agamben is a contemporary Italian philosopher and political theorist whose works have been translated into numerous languages. His most recent title with Stanford University Press is Pilate and Jesus (2014).