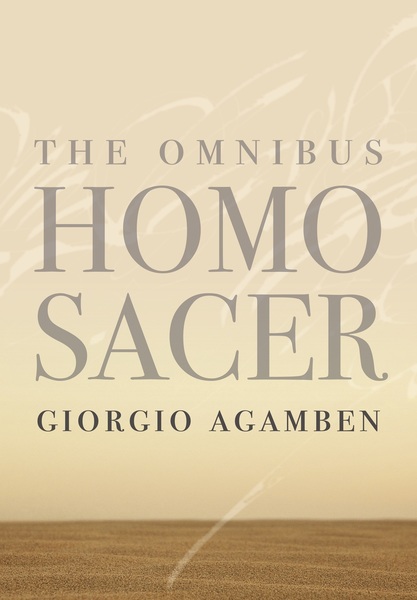 Giorgio Agamben's Homo Sacer is one of the seminal works of political philosophy in recent decades. A twenty-year undertaking, this project is a series of interconnected investigations of staggering ambition and scope investigating the deepest foundations of every major Western institution and discourse.

This single book brings together for the first time all nine volumes that make up this groundbreaking project. Each volume takes a seemingly obscure and outdated issue as its starting point—an enigmatic figure in Roman law, or medieval debates about God's management of creation, or theories about the origin of the oath—but is always guided by questions with urgent contemporary relevance.

2.3.The Sacrament of Language: An Archeology of the Oath

2.4.The Kingdom and the Glory: For a Theological Genealogy of Economy and Glory

2.5.Opus Dei: An Archeology of Duty

3.Remnants of Auschwitz: The Witness and the Archive

Giorgio Agamben is a contemporary Italian philosopher and political theorist whose works have been translated into numerous languages.

"Starting with Homo Sacer and concluding with The Use of Bodies, Italian philosopher Giorgio Agamben (b. 1942) wrote the nine books gathered in this volume over two decades. Taken together they constitute a historically rich political philosophy for the present moment....Reading Agamben is insightful and rewarding at every turn; he writes with a clarity uncommon in Continental thought. And the stakes are high for the issues he raises: from Guantanamo to the micro-details in people's Internet identity profiles, the present moment requires that one attend to the watchful warning that is the political philosophy of Agamben....Summing Up: Essential."

"Taken together, then, these diverse volumes describe 'the two paradigms' of Agamben's political theology, which might be called, after Michel Foucault, 'the sovereign-and-law paradigm' and 'the biopolitical governmentality paradigm', which constitute 'the twin poles' of 'the political machine', by which contemporary human beings are constituted as subjects and made to 'work by themselves' in the 21st Century multinational capitalist system. The Homo Sacer paradigm (the sovereign-and-law paradigm) reaches its penultimate statement in the description of the Nazi concentration camp inmates (the Musselmanner) in Remnants of Auschwitz, which provides the most striking example of how sovereign power reduces its abject subjects to 'bare lives,' stripped of all civil and human rights and exposed to sovereign violence."

"This is a very welcome and properly executed Omnibus edition that is destined to become the standard reference for the Homo Sacer project as a unified whole in the English language."