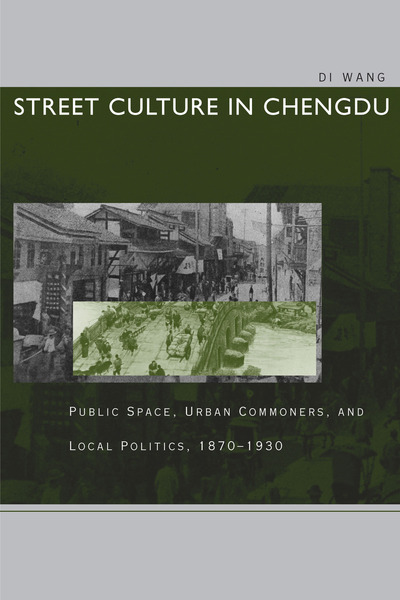 In traditional Chinese cities, a lively street culture was an important part of popular culture, and street life was central to the daily lives of city dwellers, especially the lower classes. This book examines street culture in Chengdu, an under-studied inland city, during the transformative decades between 1870 and 1930, in order to explore various topics: the relationship between urban commoners and public space; the role that community and neighborhood played in public life; how the reform movement and the Republican revolution changed everyday life; and how popular culture and local politics interacted. Drawing on a rich array of Chinese and Western sources—including archives, local newspapers, gazetteers, personal records, folk literature, and field investigation—the author argues that life in public spaces was radically transformed in Chengdu during these eventful years.

Di Wang is Professor of History at Texas A & M University. He is also the author of The Teahouse: Small Business, Everyday Culture, and Public Politics in Chengdu, 1900-1950 (Stanford, 2008).

"...the book offers a wealth of information about local customs and traditions in inland China and never fails to keep one engaged."

"This is an engaging and wonderfully readable account of everyday life and popular culture in an indigenous Chinese city at the time of social transition and political turmoil. The book is a fine example of how China's national politics affected the lives of the common people in a particular region. Wang is passionate about his subject, discerning in his analysis, and robus in his presentation. Dozens of photos and drawings, carefully selected from early twentieth century local pictorials, missionary books, and personal collections, provide good allies for the text. Students of Chinese urban history will find this book both riveting and edifying."

"This carefully researched study is a fine example of the kind of fine-grained social history being produced by the new generation of young Chinese historians."

"The descriptive power of the book (aided by carefully chosen drawings and photographs) helps us visualize an important city in transition. Sharp analyses throughout make sense of practices and institutions otherwise obscure to many of us, such as 'bamboo-branch poetry,' 'chicken-feathers inns,' the 'Climbing High to Escape Disease Festival,'...to name a few examples covered in this encyclopedic and engaging work."

"This well-researched book paints a colorful tapestry of street life in a major metropolis in southwestern China."