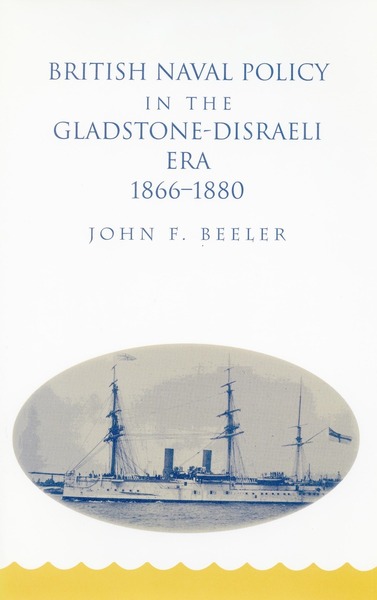 Winner of the 1998 Paul Birdsall Prize, sponsored by the American Historical Association.

This book examines British naval policy during the mid-Victorian period, with an emphasis on the political, economic, and foreign relations contexts within which naval policy was formulated. This period has sometimes been characterized as the “dark age” of modern British naval history, reflecting not only the comparative lack of research on the period, but also the marginal role played by the Royal Navy during a time of peace. The author takes a fresh look at the navy’s role, which traditionally has been viewed negatively in the wake of the reconceptualization of naval strategy brought about by Mahan and the changed global circumstances of the 1890’s.

Against a background of rapid industrialization and economic transformation, the author describes the structure of British naval administration in the Gladstone-Disraeli era, assesses the important reforms of that structure by the Liberal politician Hugh Childers, and examines the strategic and operational contexts of the navy itself. The comfortable foundations upon which were erected the world views and assumptions of mid-Victorian politicians and naval administrators were swept away with disconcerting swiftness by the mechanization of naval warfare. The author shows how this transformation went far beyond the realm of technology, profoundly influencing naval tactics and strategy, government finance, political discourse, and public opinion. This book is therefore as much a case study in human responses to the process of modernization as it is an investigation of mid-Victorian British naval policy.

John F. Beeler is Assistant Professor of History at the University of Alabama.

“I cannot rate this book too highly. It is of the highest quality, combining accuracy with sustained analytical rigor. It will be welcomed by all naval historians as providing a reassessment of the 19th-century Royal Navy and a reconsideration of the basic issues of British diplomacy in that period. It will remain a standard work for years to come.”—Andrew Lambert, University of London