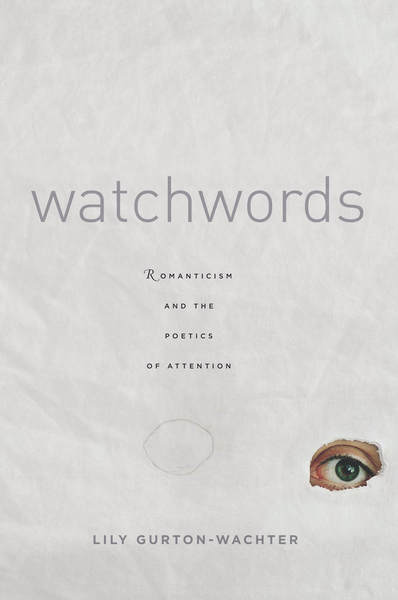 This book revisits British Romanticism as a poetics of heightened attention. At the turn of the nineteenth century, as Britain was on the alert for a possible French invasion, attention became a phenomenon of widespread interest, one that aligned and distinguished an unusual range of fields (including medicine, aesthetics, theology, ethics, pedagogy, and politics). Within this wartime context, the Romantic aesthetic tradition appears as a response to a crisis in attention caused by demands on both soldiers and civilians to keep watch. Close formal readings of the poetry of Blake, Coleridge, Cowper, Keats, (Charlotte) Smith, and Wordsworth, in conversation with research into Enlightenment philosophy and political and military discourses, suggest the variety of forces competing for—or commanding—attention in the period. This new framework for interpreting Romanticism and its legacy illuminates what turns out to be an ongoing tradition of war literature that, rather than give testimony to or represent warfare, uses rhythm and verse to experiment with how and what we attend to during times of war.

Lily Gurton-Wachter is Assistant Professor of English at the University of Missouri.

"Smart, well-researched, and provocatively argued, this book powerfully demonstrates how the seemingly least political demands of poets (to pay attention) turn out to be deeply enmeshed in political discourse of the time."

"A compelling exploration of the interplay between a poetics of heightened attention and the political debates and technological innovations associated with vigilance and alarm, this book will be important to all Romanticists interested in the dynamic relationship between aesthetic form, affect, and cultural milieu."

"In her excellent book Watchwords: Romanticism and the Poetics of Attention, Lily Gurton-Wachter examines the varied conditions of attentiveness that occur in times of war. Gurton-Wachter's study is widely interdisciplinary, drawing on an impressive range of writing in aesthetics, moral philosophy, politics, and the science of mind."

"Grounded in a thorough understanding of differing modes of attention in the period and drawing inspiration from Simone Weil in particular, Watchwords is a book worth attending to."

"Gurton-Wachter's study is primarily about poetry of course. But there is no question for her that by the time 'attention' migrates to the poetic sphere in the Romantic movement, it is already saturated by protocols that had evolved under external pressure so that even an activity as entrenched as reading takes on a different disposition. The stakes of her study—and they are considerable—are laid out nicely at the beginning.....war is the repressed and poetry, in this case, an exquisite, intricate, humane form of repression—and attention."

"For Foucault, the panopticon modeled instead 'a way of defining power relations in terms of the everyday life of men.' Not just a chilling architectural marvel, it was also a 'figure of political technology' that turned perceived surveillance and the threat of punishment toward the self-regulation of a citizenry just as effectively as it did that of prisoners. Such an atmosphere of disciplinary watchfulness Lily Gurton-Wachter finds both called for and resisted in her excellent first book, Watchwords: Romanticism and the Poetics of Attention. For late eighteenth- and early nineteenth-century Britons, Gurton-Wachter demonstrates how war abroad and the risk of war at home led to an atmosphere of heightened, militarized attention that demanded vigilance from soldier and citizen alike."

"As Gurton-Wachter explains in her astonishing first book, while we may be accustomed to isolating the pains of hypervigilance from the pleasures of aesthetic experience, Romantic poetics are forged in proximity to wartime habits of instrumentalized attention...Watchwords makes the original, devastating claim that to write and read poetry is not to resist the militarization of everyday life, but to train oneself to sustain it."

"[A] brief synopsis cannot do justice to the careful construction of Gurton-Wachter's readings or the elegant clarity of her prose. Nor does it reflect the breadth of her references to such fields as aesthetics, theology, rhetoric, and military propaganda. Finally, it leaves out the book's compelling insights about other Romantic writers.The multifarious nature of the book's subject (and Gurton-Wachter's intellectual and critical flexibility in attending to it) is one of its many strengths."

"[I] admire this book a great deal. It prompts disagreement precisely because it is so rich and nuanced, with so many sensitive accounts of Romantic-era writing and culture. It brings important issues to the fore with admirable clarity."