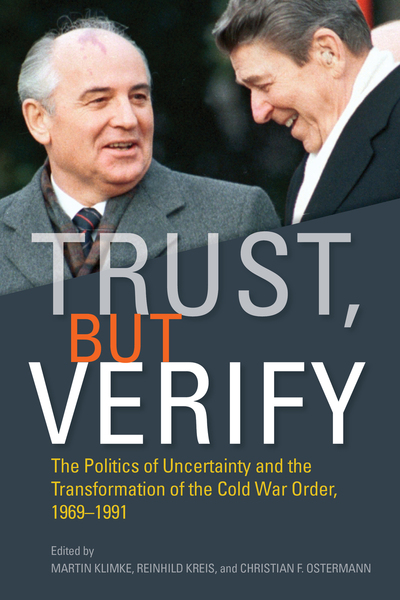 Trust, but Verify uses trust—with its emotional and predictive aspects—to explore international relations in the second half of the Cold War, beginning with the late 1960s. The détente of the 1970s led to the development of some limited trust between the United States and the Soviet Union, which lessened international tensions and enabled advances in areas such as arms control. However, it also created uncertainty in other areas, especially on the part of smaller states that depended on their alliance leaders for protection. The contributors to this volume look at how the "emotional" side of the conflict affected the dynamics of various Cold War relations: between the superpowers, within the two ideological blocs, and inside individual countries on the margins of the East–West confrontation.

Martin Klimke is Associate Dean of Humanities and Associate Professor of History at New York University, Abu Dhabi and formerly a research fellow at the German Historical Institute.

Reinhild Kreis is Assistant Professor of Contemporary History at the University of Mannheim.

Christian F. Ostermann is the Director of the HIstory and Public Policy Program at the Wilson Center, which includes the Cold War International History Project.

"This book offers an insightful explanation for one of the great puzzles of recent history: how the Cold War, a seemingly indestructible international regime, came to an end. And it will also make waves because the essays take seriously the mission of relating the political, economic, and cultural factors to emotions history."

"In an abundance of 'trust talk' in international relations, finally a scholarly analysis of how and why trust really matters: how it facilitated cooperation, enabled risk-taking, and helped to establish confidence-building politics, under the highly unlikely auspices of the Cold War."