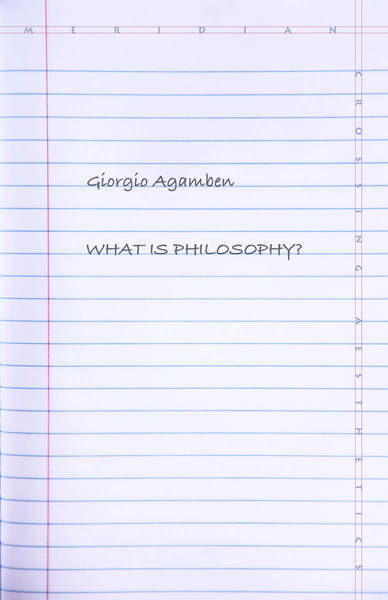 In attempting to answer the question posed by this book's title, Giorgio Agamben does not address the idea of philosophy itself. Rather, he turns to the apparently most insignificant of its components: the phonemes, letters, syllables, and words that come together to make up the phrases and ideas of philosophical discourse. A summa, of sorts, of Agamben's thought, the book consists of five essays on five emblematic topics: the Voice, the Sayable, the Demand, the Proem, and the Muse. In keeping with the author's trademark methodology, each essay weaves together archaeological and theoretical investigations: to a patient reconstruction of how the concept of language was invented there corresponds an attempt to restore thought to its place within the voice; to an unusual interpretation of the Platonic Idea corresponds a lucid analysis of the relationship between philosophy and science, and of the crisis that both are undergoing today. In the end, there is no universal answer to what is an impossible or inexhaustible question, and philosophical writing—a problem Agamben has never ceased to grapple with—assumes the form of a prelude to a work that must remain unwritten.

Giorgio Agamben is a contemporary Italian philosopher and political theorist whose works have been translated into numerous languages. His most recent title with Stanford University Press is The Mystery of Evil (2017).